Got to stop looking on ebay!!  You can always find something that you have always wanted for all you life!!

Waiting for my Uniden President Madison 4th Gen CB Base Radio Galaxy Freq Counter and Speaker to arrive from the United States soon.

The delivery seemed to be a problem as the ebay delivery track showed that it was delivered to Erlanger KY.  Blaine the ebay Seller  assured me it was the international terminal for overseas shipment by AIR to Australia so looks like he was right.

Lights come on and thats about it!

Minimum RX Audio able to be heard, & TX to be tested!

UH-OH, will have to look at all those Service Diags I downloaded for it. Counter follows Slider spot on though, and cosmetically in near new condition with a few very slight marks.

His ebay photo above, Sold as is “For Parts” like many CB radios on ebay. So once again I took a chance based on the visual presentation cause thats what I have to look at when operating it.

Glad I did! Seeing as it was new to me the first thing to do is remove all covers and check internally if everything electrical and mechanical seems OK before powering up the radio. It has had a few mods done unfortunately that someone has drilled holes for channel switches but removed them and taped up the orig wires so it is only 40 channels which is what I want to be legal in Australia.

Also has a half of a hand mic inside as a container for a circuit board with wires going to the mic input socket. As the five pin mic socket indicates that the Madison probably needs the mic in to RX it is probably a relay to ptt & RX switch to not need the mic in to listen to it, AS long as you have an external speaker plugged in to one or both of the standard ext spkr sockets as it has no internal speaker standard. This worked out well later as I wanted to put my Turner Super Sidekick on the radio and it has a four pin plug and suits a few of my other radios as well so did not want to change it.

Although it was in unusable operating condition when first powered up with my TRAM D201 external 110VAC to 240 VAC transformer, I could faintly hear static when I connected an antenna. A great indication that it was probably just needing alignment to the receiver section. All the lights and controls seemed OK, and the external Frequency counter indicated that it was on frequency with the Clarifier sliding with the counter. Seeing I was in the garage I thought I need 12VDC inside where I want to use it so switched it over to 12VDC on the back.

To cold in the garage to work on it so fired up 12VDC into the back 3 pin std CB power socket from my power supply. Worked OK on 12 VDC Switch so proceeded to connect the SO239 into my co phased home antenna system to align the reciever to see if I could get audio and rx signals on the meter. I have a lot of test gear but I thought I would just align by ear firstup to see how far out the alignment was and wether I could bring it back up easily. Turned out using the correct alignment tools and following the service manual alignment instructions the receive came up quickly by the end of the alignment procedure. It was WAY OUT! Came up near perfect, will try it for a while untill I do it by the book using the test gear. Seeing the RX was so good, I expected the TX to come up great as well. And I was right as after aligning it into a 50 ohm dummy load on my CPI WM1000 Meters, and using the hand microphone, it went from 2w ssb to 20w SSB so set at 15w and AM went from 1 watt to 8 watts but I backed it to 4w as I dont use AM anyway.

OK! Awesome! I got the standard hand mic with it and it would not modulate the radio at all without driving it hard and shouting into it which is not my style and a pain to do. I wanted to use a desk type mic on it on my bench next to my computer so it is easier and I dont have to raise my voice to work the Madison to its full modulation extent with good audio.

Wonder if anyone besides google reads this stuff? Anyway I have a Kenwood MC-85 Radio Mic which I like, but have set it up to work on the TRAM D201 very well so didnt want to change it. So that left my trusty standby mic – the venerable Turner Super Sidekick in black which is setup with the four pin plug to work on the Stoner Pro-40 and the Texas Ranger 696 Base.

I did not want to change the four pin plug or the pinouts so the only other viable solution was to use the five pin plug and cord from the hand mic somehow to interface the Turner SSK to the Madison. This meant I needed a box to do it easily and I remembered I had a DATONG ASP Speech Processor that works and has a four pin mic input with RCA Socket outputs for AUDIO & PTT.

Perfect, all I had to do was find it in my stuff somewhere, easier said than done. Well I did find it and it was perfect after I had dissasembled it and checked all the inputs and ouputs were compatible except one wire needed to be changed to suit. That done I removed the hand mic from the curly cord after writing down all the connections and colours of wires going to the PPT Switch and mic diaphragm. Cutting these off I reconnected two stereo leads with RCA Plugs to the Audio two wires into the cord and same to the PTT two wires. Soldered these with heat shrink on every solder point  and a large one overall to make it secure. 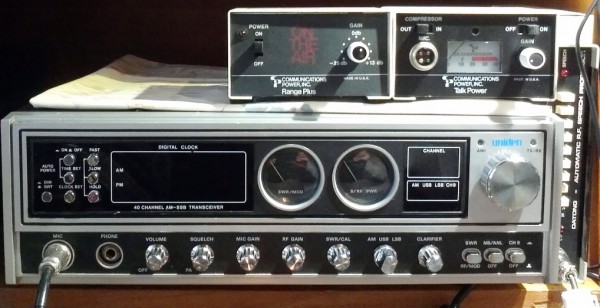 Plugged the Five Pin Plug into the Madison and the two RCA Plugs into the Datong RCA PTT & AUDIO output sockets. Plugged the Turner SSK into the four pin Socket on the front of the Datong ASP, turned the Madison Mic Gain full clockwise and keyed the SSK Desk microphone. WooHOO! The needle on the Madison jumped up to full scale and the CPI Meter moved with the modulation to near full 20W scale with ease. A bit too easy! Well with a bit of testing and adjustment of the SSK Mic Compression internally, with the Madison Mic Gain still Full CW the old Uniden President Madison CB Base Station was kicking butt! Got some great reports from stations 50-100 klms away as working extremely well in modulation and strength.

Next step was to integrate the external supplied wired in frequency counter that works extremely well showing RX/TX frequency into the original LED Clock position inside.

One thing I DONT need in a CB Radio is a CLOCK!

Luckily the clock assembly was easily unscrewed and just moved back out of the way inside the radio without disconnection. The frequency counter was simply removed from its plastic case and refitted into the clear space where the clock once was. I was even able to use the original mounting point location with some computer motherboard PCB stand off spacers to make way for the frequency counter switches not to touch the red faceplate. It is a bit farther in than it should be so the green leds are faintly showing red but can be read OK in most lighting conditions.

OK so I dont really need a frequency counter in a legal 40 Channel CB Radio that has no extra channels, but least I know when I or anyone else is off frequency because it reads spot on.

Wish I had found this one below on Youtube that was on ebay locally a while ago, although the postage for the Madison was only $50 AUD from the US.

Just shows Aussies know how to do a decent cb radio video compared to a lot of the shakey out of focus radio stuff on Youtube from US.

I will try to do as well when I put mine up on my Madison Modifications!