I have always wanted a DAK CB Radio Base!

Just like the Tram D201 Tube based CB Radio Base Station that I bought on ebay without looking closely at how many channels it had (23),

Yes it has 40 channels OK, BUT I realised after paying, its only AM!!!

And I never use AM!

I have always operated on SSB, and Channel 35 & 38 mostly in recent years.

BUT he was happy to post at a reasonable price to Australia!

Fortunately he took my advice to well protect the front face plate and controls and meters with extra packing, because it was not that well packed and arrived left on the front porch in a very knocked about condition. I bet the courier was happy he did not have to see me when delivering it! I have bought a TRAM D201 and a Texas Ranger 696 Base and they arrived in a much better state considering they come from USA.

And the purchase price was reasonable as well. Of course this was because it was only AM Mode and he would have been well aware that it was unlikely to operate anyway, even though it stated on ebay that it was working fine. The Turner Expander 500 Desk Mic was in very poor condition and the plug had been crushed in a vice so would not go in the Mic socket. Probably because he knew it would not work. I do have a very heavy Variac power reducer for 240 VAC to 110 VAC so could have powered it up if I was so inclined.

But common sense said I should pull the covers off and check inside first. Amazingly the two valves were floating around in the cabinet and were not damaged at all! That was the rattle when I picked it up out of the packaging!

But I had always wanted a DAK anyway and I suspected I could get the front controls to work on the Super Lion Mobile after a lot of refurbishment and rewiring. 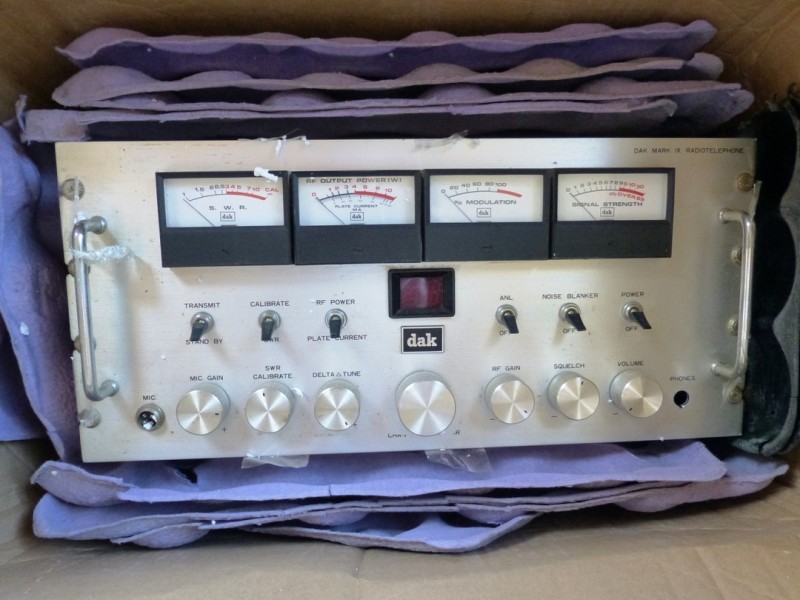 Well for a box with a nice front on it anyway, the guts was promptly removed to make way for a 240 VAC PC Power supply and a Pearce Simpson Super Lion which was made in Japan in the eighties I think which I bought at a garage sale for $5.00! I assumed it would not work but had a 40 channel clicker for parts so was worth it.

It was difficult to find much information on the web about the Super Lion, other than it has a PLL that apparently cannot be modified for extra channels. This is not an issue as I wanted the DAK to be as legal as an extensively re-engineered cb radio hybrid possibly could be.

Considering that the Super Lion has not really been modified out of its basic configuration just that the controls and meter have been relocated into the DAK front panel. For some reason the Super Lion has two meter outputs plus an onboard SWR measuring calibrate and reading output to the mobile three in one onboard meter.

Very surprised when I took the Pearce Simpson Super Lion mobile CB radio  home and fired it up, that it actually worked very well!

Both receive and transmit quality were comparable to my current Texas Ranger 696 Base Station.

Power was only around 15W PEP on 35 LSB but thats OK as I wanted it legal and it also has a non modifiable PLL but also OK for same reason.

The good thing about accidentally buying an AM  only cb radio is that I have no worries about destroying it to modify it in to a SSB operating base station.

It has a huge chassis and case that allows a lot of space for the computer PC Power Supply I am going to use as well as the mobile PCB and chassis of the Super Lion. 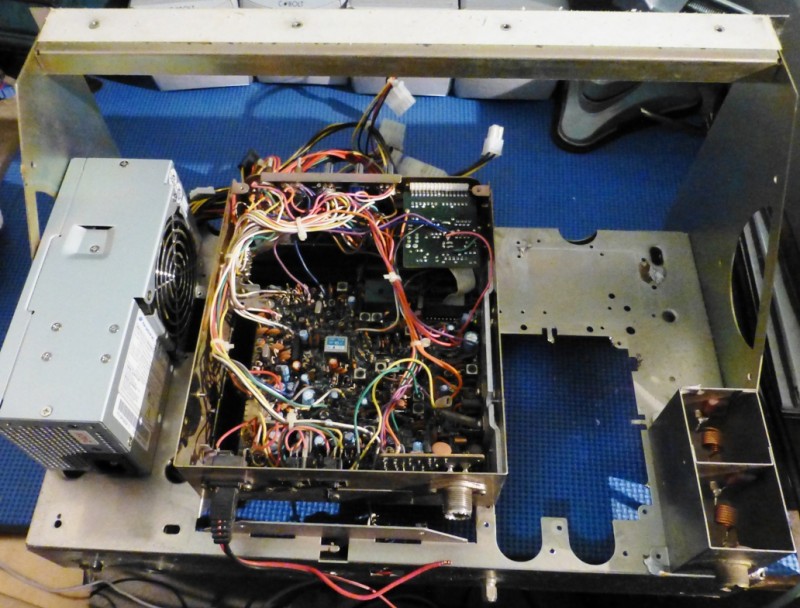 AM only Dak Mk IX cb radio. I usually cut all the wires with an inch of original wire to the PCB or part that makes it easier if someone is reusing it to know what goes where by the wire colour code.

All the parts for this DAK Mk IX radio are available from me for sale at a reasonable price, except the chassis and front panel & components, make me an offer anytime on the contact form on this website.

The ebay seller I bought this Dak Mk IX from stated that the radio was in working condition which I dont believe as it had no fuse in the empty holder and the microphone was unusable. As I was anxious to get it modified to an SSB radio I immediately started to dismantle it when I got it. It also had only USA 110VAC input and we have 240VAC in Australia so I certainly was not going to plug it in to try it!

The components seem to be in reasonable condition but there is no guarantee they work.

I am not sure if the parts will fit or suit the SSB DAK MK X also?

The whole modification process is a bit daunting at first, but as long as you plan it out and just do each change slowly and carefully one at a time in turn it is not too bad.

As the original USA power supply fitted to the DAK is 110VAC to 12 VDC, I have removed it to be replaced by one of the many old PC Switched Mode Power Supplies I have in storage for just this type of situation. After trying a few different units I selected the smallest one I had that only put out 8Amps which will be well enough for a cb putting out around 12 Watts PEP. Prior to fitting the power supply I had to redo the input cable with an approved 240VAC 3 pin plug cable. Having a lot of computer parts I found some high quality 240VAC components and ferrite toroids to filter the supply line protected by a over current cutout switch before going to the DAK Power Switch on the front panel. 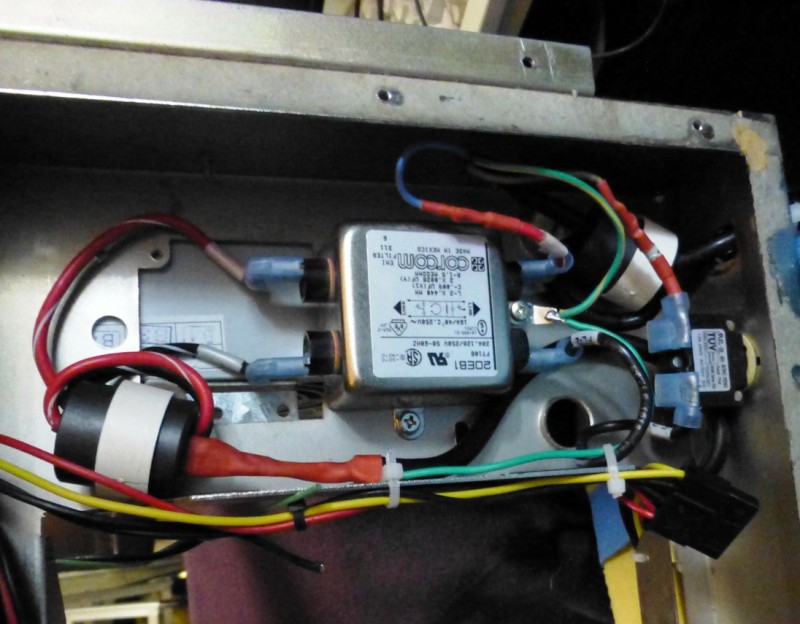 One of the most important front panel components of any Citizens Band CB Radio is the Channel Selector.

While the original DAK IX is 40 channels and has PLL control, the coding for the DAK 40 Channels would be considerably different to the the PLL code controlling the Super Lion Mobile CB.

Also the LED Display coding would be wrong but possibly could have been utilised with some trouble to rewire it to read the correct channel, but I decided to use the Super Lion 40 Channel Switch and 40 Channel Display in green.

Although the LED block is smaller it can be positioned centrally in the original display escutcheon with the original fastening system holding it in place and looking good.

Luckily the Super Lion had the complete Channel Switch and LED display as a separate assembly which was able to be removed and modified to suit the DAK IX front fascia with some unsoldering and resoldering of the connecting wires.

Shown below is the Super Lion Mobile CB Channel selector assembly in place with the LED Block in position also. 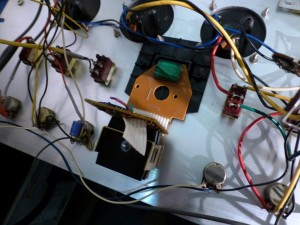 The LED Block has to be rewired in reverse to correct the orientation which will be done soon, also the PLL selector switch has to be rewired but it is all coming together as I envisioned it all to create the ultimate SSB DAK MK H (Hybrid)

As the front panel is the most important part of the new SSB modification all the switches and knobs need to be compatible in most aspects to ensure the conversion will work as expected and required.

The knobs are impressive as they are solid aluminium and splined internally to suit the variable resistors that control most operations on the typical CB Radio Base Station.

The Mode Switch is an obvious exception from the front panel unfortunately, so another one of the six rotating control knobs must be used as the Mode S/W. 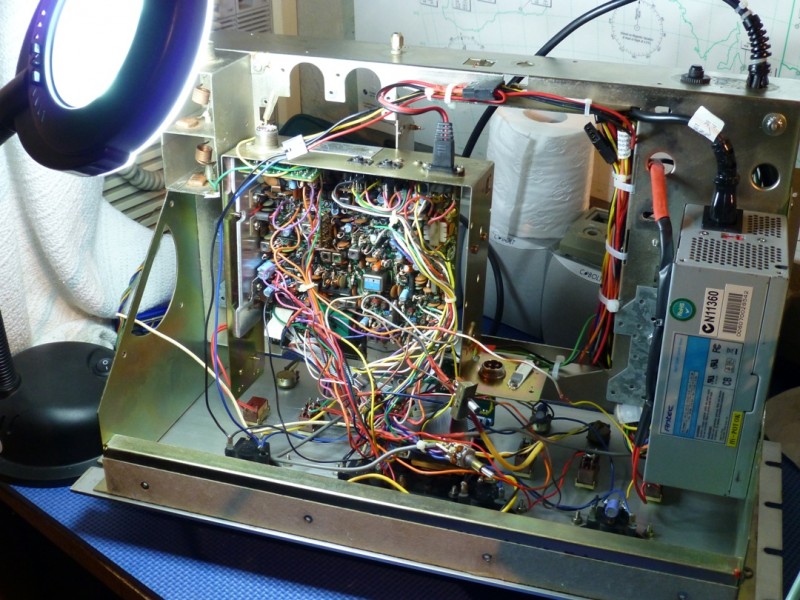 Because the original fascia control writing is in good condition except for the CHANNEL selector knob I have tried to keep the knob details correct except for two of them.

The RF GAIN control I decided to use as the MODE S/W, because the placement of the mobile chassis and the complex mode s/w wiring made this the easiest solution wiring fit wise.

As I usually always have the MIC GAIN control on MAX full time this knob was reused as the RF GAIN control as I do use this function sometimes.

Majority of the other mobile SSB rotary controls were removed and the original wiring on the DAK fascia controls reconnected to the correct wires for the function. 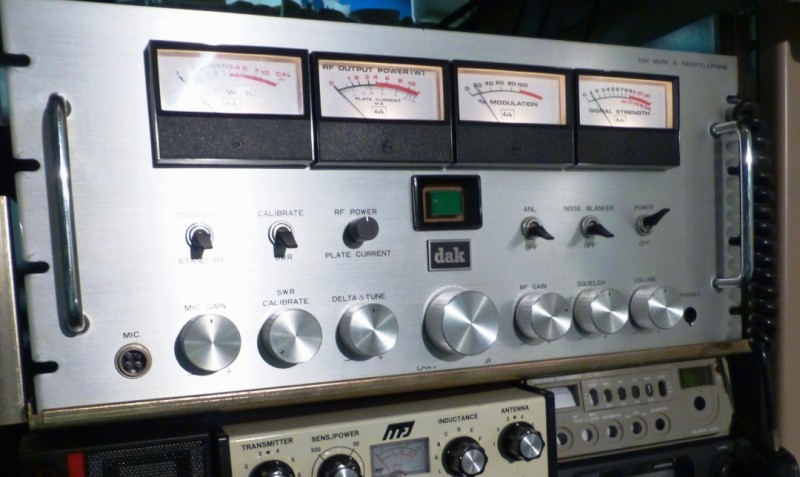 After spending a fair amount of time on making it look a lot better, I had a lot of trouble getting the correct wiring for the Super Lion to switch and the audio to sound good.

Just tonight after a lot of tuning I am getting some very good reports from far off stations that are familiar with my usual signal and sound from my Texas Ranger 696 SSB Base.

It took some tuning but I seem to have been able to get it working on the DAK MK H / Super Lion SSB with some very complimentary feedback on the audio quality.

Lets set the records straight on the Dak Mark X . Is it the best CB radio ever made? No, however both the Dak 9 & 10 have excellent transmitter’s, way cleaner than most of the CB junk out there. I have been an avid radio operator on several bands for over 40 years with a radio collection that would make most operators both ham and CB ‘cream-in their-jeans’. I also have over 35 years in the biz, so I think I’m well qualified to make the following statements.

Most CBer’s don’t have the knowledge to properly evaluate a rig, so I wouldn’t pay a lot of attention to what’s being said. They just think lots of power and loud dirty distorted audio is fine. Proof of this is all the screwed up Daks that I repair thanks to some ‘Golden Screwdriver tech, that thinks he knows radios. Dak radio are fine rigs and well worth the investment. It’s the boneheads trying to ‘hot-rod’ them that can turn them into junk.

The M.H. Scott Co manufactured the Dak X in Korea (1978-79) using a Cybernet motherboard. Cybernet was a big behind the scenes player manufacturing SSB radio circuit boards for Courier, HyGain, Lafayette, Midland and many more.

Remove the 26 chromed cabinet screws, pop the hood and it’s easy to see why these radios sold for well over $650 back in the 70’s .Start with the oversized power supply transformer that powers a full blown 40 watt Push-Pull AM modulator amp. Not some cheesy little car stereo chip like most radios use. Now feed this powerful distortion-free audio to the plate of the final output tube and watch your LOUD AUDIO bang the huge modulation meter around as it sends receiver needles swinging throughout CB land. Of coarse with all this talk power a good radio manufacture employs built in Common-Mode Chokes preventing stray RF from traveling down the power cord and a true Low-Pass Filter just prior to the antenna out. The transmitter is spectrally pure with studio quality plate-modulated audio not scratchy like some hopped up solid-state rigs.

I hear a lot of people bashing the Dak and that’s probably because there rig was out of whack. These radios with the original tubes (12BY7 & 6DG6GT) will easily do 18-24 watts with no mods. Granted, the receiver is only a double conversion front-end compared to the Cobra 2000’s triple conversion type which is a little better in regard to ‘bleed-over’ Overall, if your Dak is aligned properly with good tubes, your’e going to be one of the loudest cleanest signals on the band, period ! 73- Gregg eBay user: s9radio