AS displayed on ebay which indicated it was in fairly good condition for its 1978 birthday.

Displayed on Ebay May 2015 as a “Buy It NOW!”  SO I DID! For a lot of Aussie depressed dollars!  Sorry you guys that hesitated!

Well at least the display all seemed to be Ok on the ebay pix so I thought if 30 people are watching it I had better make an instant decision before someone else sees the value in it.

It was cheap at $70 AUD postage from the US to Portarlington Australia, I have paid more for my Siltronix VFO a few months ago!

As I own quite a few CPI CB Radio’s I decided I had better get a Stoner Pro40 to compare them as the internal PCB’s and components are very similar from photo’s I have seen.

The seller had wrapped and packed it extremely well as I had requested and it arrived looking all ok, unlike my DAK MK IX a few months ago which was drop kicked all the way from the USA!

Unpacked there were a few obvious things that needed TLC so I started by using some of my wifes special face wipes to clean up the facia and switches to like new. Some of my wife’s lavender furniture polish on the dried out end wooden plates transformed the look to as originally sold and had her even liking my new cb radio for a change.

AS I Have a few 240VAC to 110VAC heavy duty transformers, I was keen to start it up so pulled all the covers off to check the electrical wiring and fuse etc. As everything looked Ok I decided to plug it in to the 110VAC transformer and turn it on. This was after I had collected extensive information on the Stoner Pro40 online from many resources and had an idea how to drive it.

This is always a stressing time so I connected my 27MHz Quarter Wave and DDRR cb radio ariel into the correct antenna connector as is has two. 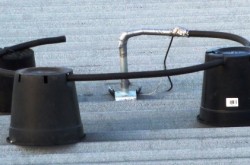 The other is for the add-on AM CB Radio option as it is an SSB ONLY cb radio, operating on USB & LSB. I did not connect any mic as none was supplied and hoped it did not need any mic pins shorted to RX as some cb’s do to hear audio.

This cb radio also has no inbuilt speaker but has a few options to add one but specify it must be 8 Ohms if you do. So I connected a suitable speaker into the rear plug as the front speaker socket had beeen replaced by a push button switch which puzzled me, but suspected it would add frequencies. AND it did once I fired it up. In an impressive way too, as it was telling the internal CPU to reprogram the PLL and selector to count up from 27.415 to 27.855 on the frequency counter across the 27 MHz free-band. This was the first thing I removed as I dont need it to be confiscated by radio inspectors if I ever get a visit. Not that I am silly enough to bother going out of band either to invite them here! The large knob in the centre is a clarifier and the channels are selected by push buttons up/down in Slow/Fast operation. This is somewhat similar to my SBE Side Band Engineers SBE VI CB Base Console radios but not as sophisticated as the SBE memory scan etc.

On pushing the AC ON button I got the display showing CH#9 and the frequency with NOISE from the speaker! OK First hurdle over we have RX! Stepping down the band below ch#1 to CH#40 then to CH#35 we had a few cbers having a QSO in Melbourne about 50 Klms away. WHOO HOO! If we have audio receive then only TX transmit is the only next obstacle to the cb radio working on air. Tuning some of the controls seemed a bit strange and a few did not do what I expected. I checked and found a few mods which I thought were unnecessary and ruined the operation of the radio. The RF Gain was actually moving the TX Frequency and was wired full on RF Gain. So I reconverted this to RF Gain operation which I need and use occasionally.

This Stoner Pro40 has a HOT RX receiver with a very low noise floor, with SSB signals coming out almost like FM out of the quiet noise level. I think it may be better than my CPI CB Radio’s!

I remember I was having a debate a few years ago on the CQDX11.net forums about “The Best Legal CB Ever” and the operator Bob,
269 Hunter Valley was singing the praises of the Stoner Pro40 over the CPI Range here: http://cqdx11.net/CB-radio/topic/cpi-greatest-legal-cb-of-all-time

I may have to eat my words on that forum debate after operating the Stoner Pro40 CB radio base station with my Turner Super Side Kick driving it to perfection at about 15 watts after some slight retuning of the ALC.

BUT there is a PROBLEM!  The Stoner Pro 40 works well until the heat gets to a few components and it drops out the VCO and the display after ten minutes operation. I have identified the problem areas and solved two but the main transformer leads go into a molex plug to the AC to DC converter PCB and the pins seem OK  but they are losing contact occasionally and the smallest touch gets it going again. I may just remove the plug and direct solder them to the tall pins.

There are a few transistors that are extremely hot and need some cooling tags I will pull from old computer power supplies soon.

Below is a graphic I made on the tune up points of the Stoner Pro 40 – open to all to copy – CLICK image for very large version. 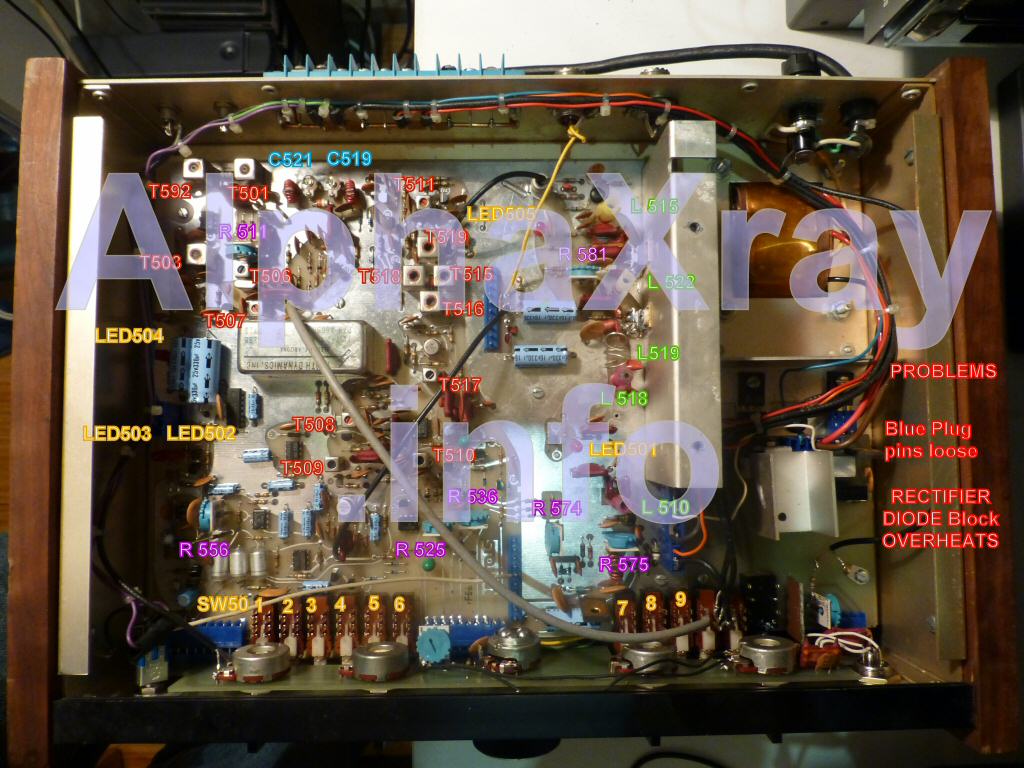 A number of unusual engineering techniques were employed in the PRO-40.

To eliminate cross-modulation interference from adjacent channels, Stoner avoided the conventional transistor r.f. amplifier/mixer technique used in virtually ALL CB receivers even today. In fact, no r.f. stage is used at all and a Schottky diode mixer is employed, similar to that used in commercial SSB equipment. With no amplifying stages in the front end which could be overdriven by strong signals, the receiver uses dual cascaded crystal filters for extraordinary selectivity. Reception of unwanted sideband is totally suppressed. This allows the radio to be used within 100ft. of another station without harmful interference. Adjacent channel rejection is greater than 90dB, and cross-modulation rejection greater than 120dB.

AM heterodyne can be eliminated by the “Whistlestop” passband audio filter, which can also be used to “peak” audio, helping separate stations on the same channel. In addition, dual time constant “NB1″ and “NB2″ noise blankers are provided.

The PRO-40 employs a built-in speech processor which creates a unique SSB tailored audio envelope and “talk power” without distortion or the need for an amplified microphone. The radio was factory equipped with an Astatic GD-104.

What does it sound like on the air? In the 11m environment full of “peaked and tweaked” radios, over-modulated signals and excessive background, the Stoner shines, always spurring unsolicited comments on the “sound”. “..What kind of radio are you on?….What kind of mic are you using?…very pleasant sound…easy to listen to…easy on the ear…broadcast quality…sounds real smooth…very crisp and clear…..” When you key a Stoner, people listen. 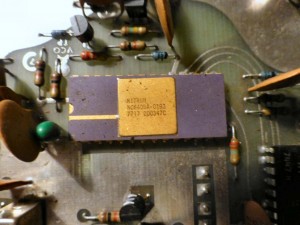 Fine tuning the PRO-40 is a real pleasure with the wide range 10-turn clarifier and large dial for smooth response.

Another interesting feature is the unique discriminator type SWR meter, unseen in typical CB radios, indicating the optimum transmitting frequency of the antenna without calibration. The meter works much the same as the tuning indicator on an FM receiver. Deviation from the centerline of the meter indicates antenna mistuning and whether the antenna is high or low of the operating frequency.

[AX05] I have found that the meter in my #322 is not mechanically working, so have taken the meter wires out to a box I have mounted some Akai FM Radio Tuner Meters into and one is the same as the Stoner SWR movement which is much larger and easier to read.

Although the PRO-40 does NOT offer an AM or FM mode, a provision is made to allow interconnecting antenna and power to a typical external AM/FM CB radio, to allow using both radios on the same antenna without swapping antenna leads by simply depressing the “AM” button. This passes the AM/FM signal through the PRO-40 internal multi-stage TVI filter and frequency counter for accurate display of the external radio output.

In 1977-80, even with contenders such as Cobra, Midland and Browning all vying for the high end CB market with impressive models such as the 2000GTL, 78-999 and Golden Eagles, the Stoner PRO-40 SSB stood out as the 11m DX Sidebander dream radio.

[AX05] I belive that the CPI Communications Power International CB Radios were the closest equivalent and will be trying to test this in the future with mine.